Knowing Orione Knowing You is a new series of interviews with the people who make Orione Care what it is. Throughout this monthly series we will be getting to know people from all areas of Orione Care and hopefully shed some light on what makes this charity so special and dear to those involved with it.

John Tonner is the CEO of Orione Care. 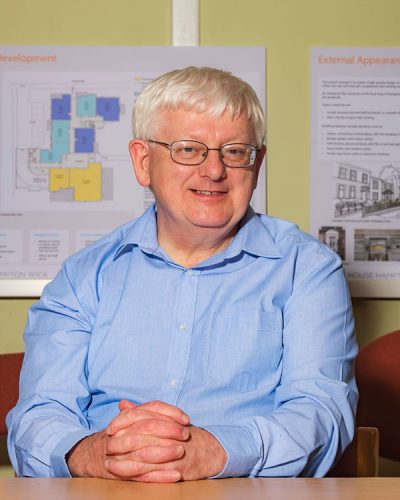 Hello John thank you for agreeing to be the first guest on Knowing Orione Knowing You AHA!

So, you have been the CEO of Orione Care since November 2016  but can you tell me how you first came across the sons?

In 1997 I was a member of the Hospitaller Order of St John of God when I took time out of that lifestyle to go home to Glasgow and care for my father, who was dying, and my brother who had a learning disability.  In 1999 my father died and my brother was set up with a full care package to enable him to continue living independently in what had been the family home.

I was then at a juncture and as I had an agreed period of 3 years leave from the Order, with about 2 years left to run, I decided to look for a different experience.  One of my brothers faxed me (it was the days when fax machines were everywhere) an advert for a job with the Sons of Divine Providence at Hampton Wick.

I had heard of the Sons before of course when many years previously Fr Malcolm had helped the John of God’s with some policy statements in the world of Learning Disability Services but I had never visited any of their services.  So in the year 1999 or 2000, I can’t remember precisely, I came to Hampton Wick to be interviewed and was given the job of Operations Manager to oversee the day to day provision of the services in Hampton Wick, Vauxhall, Walsingham, Upholland, New Malden, East Molesey, Teddington (then the ‘old’ St John’s).

I did that for about 12 months when I was ‘poached’ by the Hospitaller Sisters of the Sacred Heart of Jesus in South Kensington.  Over the years I kept in remote touch with the Sons and often did some administrative and Human resource tasks for them on an ad hoc basis, until they asked me to take on the role of CEO in 2016.

Tracking way back into the not too distant past (I hope) could you tell me a happy childhood memory?

This is where I can rant about having a miserable childhood with no happy memories, but that would be wholly untrue as I often look back and wish I was there now, no responsibilities and no cares.  As soon as you asked that I thought of being a 6 or 7 year old in a family of 12 children (me in the middle) and one of the treats of life was being the first up in the morning who could then accompany my father to the first lamp post in the village of Old Kilpatrick, in Scotland, and be handed a thruppeny bit (or threepenny bit for the English speakers) as a reward.

It never donned on me at the time it was just a confidence trick to get everyone out of bed for school.  My memory was of keeping my mind of that thruppence, not the pleasure of walking to lampposts when it could be minus 10 degrees and frozen outside.

As you left school, what did you see yourself doing?

I had a teacher who looked upon me as his star pupil and who was one of those people who thought his pupils should achieve more of what he had not achieved, and he was totally convinced that I should be an accountant, so much so that I thought that was a good idea too.  Probably the influence of those thrupenny bits!

Was it a surprise then looking back that you ended up in this sector?

Indeed it was a big surprise to me.  When I was at university in Glasgow a friend of mine introduced me to the Brothers of St John of God who were at a vocations exhibition in Glasgow.

In the following few years this friend and I visited the Brothers hospitals in Yorkshire and County Durham.  My friend was determined to become a Brother.  Later, when I was working as an auditor with the Commission for Local Authority Accounts in Scotland my friend told the Brothers he had changed his mind and no longer felt a desire to join them.  I was with him when he told this to the vocations promoter who was himself looking very disappointed.  On the spot I said to the vocations promoter not to be so depressed as I’d join them instead.

It won’t be difficult to imagine, but he was not that excited with the prospect and started giving me all sorts of reasons why it was not so simple etc. etc.  That just made me more determined.

The thing I saw was the work the Brothers did in being nurses, doctors, therapists, lab technicians, gardeners, accountants, radiographers…

I was impressed by the fact that men in the Catholic Church in religious institutions could actually be useful to people, something I had often thought was not a reality.  Hence my change of career from Auditing to Care and health.  Having said that, because of my background I was almost immediately thrown in to the accounts office of the hospital from day one and never got to become a nurse or a doctor.

I was thrown into management roles very early on and eventually managed to convince my superiors at the time to let me go and study Occupational Psychology as the Brothers saw their numbers decline and lay workers being more in the ascendancy, the Order changed its constitution to say that the main role of the Brother should be to inspire the lay staff.  In reality, I hope I did do that but I mainly continued in management roles including being a Provincial Councillor, Trustee, Prior, Director of Human Resources, Chief Executive…

What are you most proud of from your experience in the charitable/care sector?

I would have to say the projects I led in closing down two long stay hospitals where we took over 200 people living in institutions and helped them move to more community based services with a greater emphasis on housing with support rather than ‘care’.

These were done during the 1980’s when the Oder saw the light of future care at an early stage and decided to move forward with some real courage and trepidation.  I often recall the shock I felt when I realised that with moving people out of the institution the Brothers no longer had someone to do the laundry, cook the meals, drive us to the airport – the real personal shock was having to be de-institutionalised myself but that gave me a real sense of what it was like for people we had kept in institutions for years moving out to the community.

What do you think the biggest challenge to the sector is at the moment or will be?

I think the biggest challenge to the sector is going to be how to ensure the quality of support given to vulnerable people.  Society fails to recognise the value of support workers who are paid so much less than any auditor.  The local authorities, the NHS and the government still have not managed to convince themselves how to pool resources and make them work better.  There is talk about it and we can only hope that once we get over the current political hiatus society will get back to looking at this again.

Where do you hope Orione Care will be by the time you leave?

I trust this question is not notice that it is time for me to go.  I agreed to be in this role for 2 years, have now been in it for almost 2.5 years, and I feel the current workload will keep me here for a few more years yet, all going according to plan, which doesn’t always happen as smoothly as I would like.

However, in the next 3 years I would hope to see the services at Hampton Wick and East Molesey redesigned and up and running with the charity better financially stable than has been the case for many years.

By then the charity should be feeling confident to begin to start new works that may not be profitable but worthwhile, like housing asylum seekers, refugees, homeless families, students etc. and do this in co-operation with other organisations so as to keep Orione Care and The Sons of Divine Providence flexible enough to be enablers rather than having to do everything themselves.  I expect that latter task needs to be in someone else’s hands that has a bit more energy.

If you a magic cheque would drop through the post to Orione Care what one project or thing would you use it for Orione?

If that cheque arrived now it would be eaten up with development costs and would not last more than five minutes.  If it proved to be a bit more substantial I would want to see it invested in the way a pension fund is invested, with the pension coming to the charity to help ensure its future.

However, as the cheque would not be made out to John Tonner I would have to defer to what the Trustees felt was the best thing to do with it as that would be their responsibility rather than mine.

And now If a magic cheque dropped through the post for you, what would you spend it on?

I would do exactly as I said above.  At 65 years of age and having lived for 30 years as a religious you can imagine my shock at the age of 55 having to take out a mortgage when I finally decided not to go back to the Hospitaller Order.

Now I have access to the state pension and realise that it would not cover mortgage payments and service charges for my flat, I would put any windfall into a pension scheme to hopefully allow me to retire gracefully by the time I am 70 years old.

Now everyone has a very eclectic taste in music but if you had to pick one band or piece of music what would it be?

No need to think on this one, Hallelujah, written by Leonard Cohen and sung by Jeff Buckley.  Coming from a Jewish background Leonard Cohen regularly wrote songs inspired by the Old Testament and intertwined with a very secular philosophy, even sometimes tending to the pornographic.  This song is no different but for me it reflects my own life long struggle with my spiritual beliefs, Catholic faith, and the world in which we live.  It’s not that I find these things conflicting, for me they are very much intertwined and it is getting things in a healthy balance that matters.  Hallelujah just captures all of that.  My only disagreement with Leonard Cohen is that I don’t think the Hallelujah is that ‘broken and cold’.  Life is a lot more positive when you believe in a forgiving, merciful God that I really do depend on day to day.

Well that wraps it up John. Thank you for taking part in our inaugural edition of Knowing Orione Knowing You.

Thank you, it was a pleasure and I look forward to reading who you interview next!